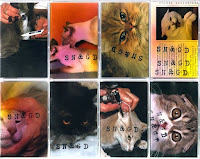 Attention experimental fans: this one is a definite release to check out! Two extremely awesome underground, DIY , improvisation, electronic effect gurus collaborate to bring to cassette some of the freshest avantgarde in years. Imagine tape manipulation (Nurse With Wound) and knob twitching as hums and buzzes of electronic sound fade in and out, unevenly yet still maintain a certain rhythm and flow. That's roughly what you get here with Sensible Nectar, although there really is nothing "sensible" here except the sense-ations of live and uncompromising editing and manipulation of sound. Take the best noise elements of the cranky and crackling old tube amp analogue feedback when you get too close to it with the guitar and it gives you those awesome fuzzes, pops, hisses, and screeches and then add some sparse vocals of an industrial nature and that's what you have here.

"Apathy" opens up with the what could be described as Jimi Hendrix trying to solo in the middle of a strong magnetic field, the pickups cut out, the wah is extended and the warm fuzz of the guitar and synth output blankets over you in layers of dense vibrations as the screech of guitar feedback lurks behind it all.

"I'm No Man's Slave" is a definite power industrial, heavily effected spoken word track that immediately calls to mind the vocal effects of: Brighter Death Now, Painslut, Stahlwerk 9, Rasthof Dachau, and company, but coming through as a bad signal on an old transistor radio. In fact most of SN's contributions on this split could accurately be described as: the sound that you would get trying to get a shortwave transmission on an old transister radio, complete with jarbled and inaudbible speech, hints of some music from other signals crossing, and all of the hisses, pops and brrrrrrrrrrrrrrrrrbbbbb...eeeeeeeeeeeeek....rrrrrrrrrrrnk your grandpa would swear at during the second world war when his nightly programs were interrupted by bad weather or the interference from the war itself.

The equally insane and incoherrent electronic rambling from Gorgonized Dorks pierces another nice hole in your eardrum. Thunderous rumbles of low-end noise, filtered through something, and throbbing like your thumb after you just jammed it as you closed the door on it by mistake. I bet these guys would both be leveling to see live as both are welcome additions to the world of extreme audio. The general sound of Gorgonized Dorks lends itself more to a looser, but equally noisey and massive sound and intensity as power electronics does, but they also manage to soften it just a bit through analogue equipment and less of a sense of rage and agression. This may not bash your cranium in or lash at you with venom dipped chains, but it'll definitely blow the roof off when played at the right volume. Also guaranteed to piss others off.
Posted by Born Without an Anus at 3:18 PM