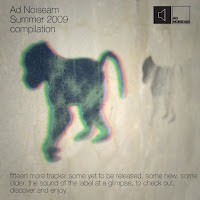 I've been a long time fan of dubstep, darkstep, breakcore, and harsh and groovy tunes and this is one of those labels that's been consistently superior and worthy of my audio needs and high expectations. I've been out of it for about a year and left off with this comp that I keep spinning and feel the need to pay some homage to. Many electronic and drum'n bass labels went the MC/hip hop route and lost my ass 10 years ago, but some labels still manage to keep the groove without redundancy and crap, Ad Noiseam and Planet Mu, along with Ant-Zen can still make you bust a move without puking and running away from the post-rave hip-hop invasion. Maybe that shits novelty has value elsewhere, but here in the US where it originated, it fucking blows and is nauseating, and this is coming from a funk/jazz head like myself.

Most of the artists on this compilation are amazing artists and display true electronic rhythmic and funk values as well as explode upon the listener with some sick and twisted basslines and post bullshit rave hard banging stuff, and are worthy of mention here like: Detritus, Larvae, Somatic Responses, Cdatakill, The Teknoist, Math head, Cardopusher, Mothboy (on occasion), Broken Note, Raoul Sinier, and DJ Hidden. I miss the days of Aphex Twin, Peter Namlook, Bill Laswell and the Mick Harris DnB stuff at times, but you have to admit that some of this stuff is killer and stomping and so worth the time and effort. Here's more proof that electronic grooves aren't dead. Anyone who claims they don't dig a great bassline and bit o' funk and discredits some of the best talent and underground scenes is just full of shit. So show support, enjoy the sounds and absolutely expand your listening experience, if ya dig Parliament and CAN, King Tubby and the original dub scene, Mille Plateau and the microhouse dub tech invasion, you can't pass this stuff up.
Posted by Born Without an Anus at 6:14 PM