Posts left over from Forbidden Magazine 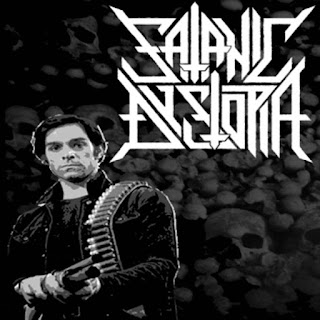 Satanic Dystopia are one of those chupacabra bands, a rare find as they are a definitive early black metal sounding band from back when Celtic Frost and Hellhammer were only on tape, Venom on vinyl and tape, no Norwegian scene or sound existed yet, and Quorthon was only known to a handful of folks. So what you get with the Double Denim Shotgun Massacre is a heavy violent thrash black metal with horror, exploitation, occult film themed lyrics of a great death/ grind album and even hints of real industrial (no oontz oontz or synth/ keyboard) buzzing effects. In other words a shitstorm of razor blade hail and caustic tones to a thundering rhythm of addictive aggression that's sure to make crave the slash and burn of this cassette.
Hailing from the UK, and with a deep penchant for gratuitous violence as much as the exploitation and horror film genres, Satanic Dystopia wage war on the senses and unload 8 hollow tip rounds of black thrashing metal that’s pretty hard, even for the uptight “old school” snobby connoisseur to deny heartfelt appreciation of…and would you really fucking believe it…? !!! We have those types in this type of metal realm now. And what’s even more hilarious is that were Satanic Dystopia around in ’81 or ’85 they would have been one of those glowing polished turds alongside Venom, Bathory, and the Celtic Frost/Hellhammer output. People thought this stuff was noise and talentless crap, even in many metal circles, but it turned out to simply be tarnished gold that merely resembled a crusty fetid shit lump. So fuck the superficial shit huffers that assumed flush this stuff than investigate it.

And if the cover art and very Goddamn accurate description weren’t enough to give this release some credibility to some still pinching pennies with their (tight) ass cheeks, it also comes in a nice DVD case (pretty packaging always helps for some reason), but because the sound is what ultimately matter most I’m posting videos below for some of the highlights of this album. 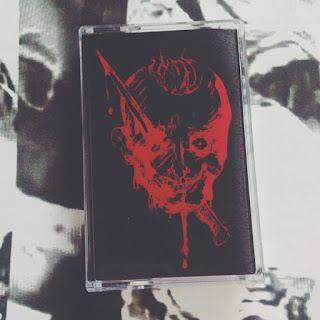 This tape literally just arrived, about 20 minutes ago to be exact, and I so quickly unwrapped it, shoved it into the player, cranked the volume up to an ear bleed inducing decibel level and let it rip…AND indeed it is.  So far it’s a whole lotta Deathstrike/Master hardcore infused death metal grime with a dirty little twang of bass underneath the distortion haze, but I’m honestly getting a stinking suspicion given the rattling bottom heavy thuds of rhythms and the overall clamoring tirade that this is another Florida band like OV, IVES, Vomikaust, etc.

Just looked it up and indeed I’m correct about the Florida roots, but definitely not because they sound like the Primal Vomit bands I’d just mentioned.  Tyrants of Hell are heavy, ugly, and muddy enough with the right aggressive punk scum tinges as those awesome ragged shitstain bands do, but this Demo here is certainly more of a very early thrash death metal infused with legit death grind (think General Surgery, early Carcass) sort of thing. The vocals are more upfront hardcore/thrash based, spewed and grunted, as opposed to guttural burps and gargles, which makes me think early to mid-era Master and Deathstrike, especially when served alongside these dense thrash rhythms which, although still very distinctly hardcore derived carry the groove and push of fists and slamming bodies, but with the mildewed grime thickener of tones that was early death metal. So now with the meat and potatoes portion of this write-up consumed I’ll start to belch up some of the afterthoughts (BTW, the tape is already over).

Overall the Demo is a killer thrill. I really love that early death metal sound that gave so many incredible bands a lot of directions to move in as most of those bands did not all sound the same, before it became Incantation one-offs and contrived bullshit. It’s not everyday, or in my case every year or two that a good new death metal band comes along that works perfectly with my tastes. I guess the only downside for some here then would be the shortness of the Demo which clocks in at under 15 minutes, BUT before some of you begin to squirm away let me inform you that it repeats on both sides so it’s a double-sided sort of single-sided tape which gives almost a half-an-hour of listening (laughs).  Just think of it as a necessary to own 7” but you don’t have to repeat it or flip it every 5 minutes.
http://tyrantsofhell.bandcamp.com/
http://www.wohrtrecords.com/
Posted by Born Without an Anus at 11:56 AM