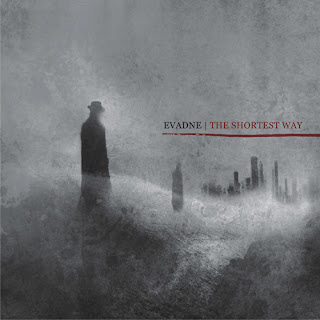 Evadne hails from Spain and with this second full length and the mixing and mastering, as well as occasional vocals, done by Dan Swano (Edge of Sanity, Novembers Doom, Bloodbath) you should already be expecting high quality sound and song structural dynamics, which is exactly what you get with The Shortest Way.

The vocals remain mostly throughout as a decipherable gruff throaty growl, sometimes almost spoken as if narrating a story, but the main thing is that the aggressiveness is omnipresent yet never overwhelming to where the lyrics are mushed into useless ooze. Clean vocals do appear on “One Last Dress for One Last Journey”, but only as a brief introductory and outro appearance, and even then though majority of the song is melodic and dreamy with some dense riffing and piano underneath to really bring out the emotional undertone, the riffs remain anthemic and pulsing as this 8-minute song flows in a fluid stream creating its own path along the surface like a stream of blood.

Due to the quality of the musicianship, the brutality infused with complex melodies, and the dominant presence throughout the album as a whole it’s just not plausible to cover it in a written review. Do not expect gothic metal clichés, cinematic and grandiose vomit inducing grandstanding, or even post-rock/post metal meandering, just expect something morbid and sincere with an array of emotions that is both doom and death metal worthy in sound heaviosity and somehow still almost “pretty” (?) in a macabre way. DO NOT overlook The Shortest Way as abysmal droning mixed with post-rock, whether you are a fan of the extreme doom styles or not you WILL want to at least hear Evadne!

Most of the reviews are extremely positive, in fact I only saw one negative one, but as was his fatal flaw, never go into an album with preconceived notions. If I hadn’t stepped back and let this one come to me over the last two months, I’d never have realized its merits. To some people all black metal is the same, the same goes with extreme doom styles and any other style really, so at least take my word for it “on faith” and hear for yourself. If it was indeed mundane and standard I wouldn’t spend the fucking time reviewing it, it’s not like I don’t have a thousand other worthy reviews to get through and can afford to literally piss away time down the sewage pipes. It’s also not overloaded with emotional pandering and grabbing at the listener for pathos, it’s just genuine and intense AND creative.

Examples of mundane, exhausted and predictable, and sometimes nauseatingly so would be the SP release of Edenian Winter Shades, I just cannot swallow it even if I’m pinching my nose and holding my breath as I pass it down my throat quickly.

Posted by Born Without an Anus at 9:32 PM No comments: Links to this post 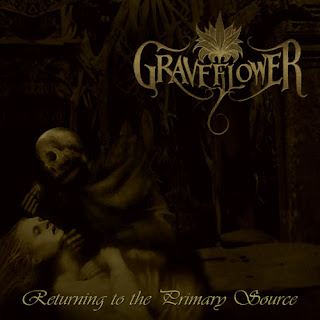 Perhaps it’s the weird unseasonal gloom outside or my overabundance of free time  that’s managed to get me in the mood for dismal and drowning doom like Graveflower, but regardless of reason I am actually quite glad that I’ve gotten the chance to finally be fully dissolved into this album, which on the surface left me initially unmoved months back. With some things, such as funeral and death doom styles, they really do just require the right frame of mind to appreciate fully so whether you’re already a fan of these styles or just in that right mood and personal introspection this is a great and progressive album that might actually drift away from balmy gloom with melody and clean morose vocals playing as dominant a role and as heavy riffs that create a void in the time space continuum and morbid drawn out growls.

“White Noise” starts with some great traditional doom metal riffs and melodic guitar leads that show more promise than the expected vortex of “funeral” gloom. The doom rhythms progress throughout the entire song, all 9+ minutes of it, the mournful clean vocals remind me of classic death rock (Virgin Prunes, Christian Death,etc. ) vocals intermixed with the expected but not indecipherable death doom ghoul growl, and there’s also some prog/post metal hinted at that becomes more pronounced in the following “My Turn” . Although the Isis/Pelican “proggy and atmospheric wash of drifting melody” mixed with the heavier, but not extreme doom, is not overly unique it does actually add some meat to the emotional vocals and makes the 11-minute “My Turn” more fluid and ethereal. Honestly, shit…it’s ridiculous to expect to hear something NEW these days during the initial listen, but for those who spend the time to listen to something more than once or twice will find that there IS, in fact, new sounds and rhythms being created.

“Rain in Inferno” is heavier in the vocals and shorter in length, 5-and-a-half- minutes total, definitely more of a moody epic doom song with some guitar squeeling and nice doom/metal leads appearing throughout thus making this one my personal stand out.

“The Falling Leaves” is another moody and colossal 11-minute doom ride, but here we now have a speedier tempo, some solid grooves, lots of fluidity in riffs, spoken word,  and diverse elements/styles such as a death metal crunching guitar sound in some of the rhythm parts.

Although not breaking any new ground on the surface, there’s a lot to unravel in terms of moods and intricacies within the lengthy emotional tracks here that deserves admiration and to be heard. Don’t fall into the blindmans ditch thinking that all extreme doom/funeral doom/ death doom are all the same and either gothic and grotesquely emotional or abysmal and droning growls with the occasional post rock tidbit thrown in. I almost cast this one aside myself until I just stopped trying to listen to it and dissect, then it revealed itself in true form and it was worth the effort.

You can also stream the full album here:
http://graveflower.bandcamp.com/album/returning-to-the-primary-source
Posted by Born Without an Anus at 9:30 PM No comments: Links to this post

The Communion – A Desired Level of Unease 12” (one-sided) 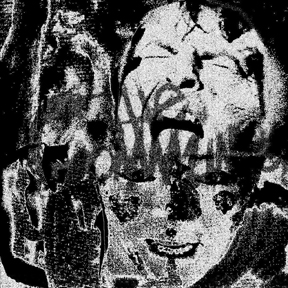 One of Prison Tatt Records very latest releases and a very unique addition to my collection this LP lives up to the titles description as The Communion blend early true 90’s sludge Eyehategod/Acid Bath/Seven Foot Spleen/Noothgrush with the modern twist of Seven Sisters of Sleep and Integrity stirring up a stampede of shrieking anti-social/anti-PC lyrics with a crust metal texture, doomy blaring chords, and early grind obliteration reminiscent of early Napalm Death/Deviated Instinct/Cripple Bastards.

If, like myself, you’re now completely nauseated and repulsed by the continual stream of crossover bands and sludge clones, but can’t help but still love those styles from their original days, then pick up The Communion!!!! You’ll get the right fix for the right sounds and feel, minus the gimmicks and piggy backing that too many bands and labels thrive on these days. Another plus to this is that there’s no Eyehategod or Neurosis worship, just blast beats and swells of distortion and REAL angst…and the frequent Crowbar downtuned riff crushing down like a crane falling on your head.  Just check out the audio samples on the PTR page and you’ll hear the definite Seven Foot Spleen classic and true sludge sound on “Gash Ladder” and the more blast beat oriented thick sonic assault of “Rabid Bats”.

http://prisontatt.com/
Posted by Born Without an Anus at 2:40 PM 2 comments: Links to this post