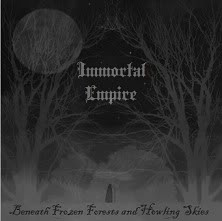 As with another recent black metal act, Immolith, UK based solo act, Immortal Empire, is staying very true to the late 1980’s-early1990’s Nordic black metal sound without being a mere regurgitation. Aside from getting positive reviews in Terrorizor, he has also gained a strong following and reasonably so when you really get a chance to listen to IE. The sound is a blend of medieval/folk themes and rhythms, a raw and hollow production sound without jeopardizing the quality of the tracks, blistering guitar riffs, and some symphonic and ambient undertones.

From the first instant the opener “Benight the Howling Horde” comes on I’m catapulted back to early Nordic black metal days of Immortal, Burzum, Bathory, early Emperor, and Darkthrone. There’s the raw and pure energy in the pounding thunder of the drums and the heavily over distorted guitar tone like buzzes and revs like a chainsaw and the feel of being recorded in a hollow den somewhere. There’s a thrash-like youth to the riffs and the symphonic background giving a mysterious and foggy forest-like atmosphere to the track.

“Dark are the Hours” is more of a stripped down black metal skeleton of a folk/medieval influenced track. The main rhythm is a folk one, almost like a jig or old pagan dance that is accompanied by a variation of maniacal raspy screams and an almost chorus “aahh” among aggressive distorted riffs.

“Younger Days” continues the flow of folk-like rhythms and just launches out of a dark cavern with a furious guitar sound and the growling of the beast unleashing itself from deep within the bowels of utter darkness.

Artist contact and audio samples:
http://www.myspace.com/immortalempyre
Posted by Born Without an Anus at 5:38 PM