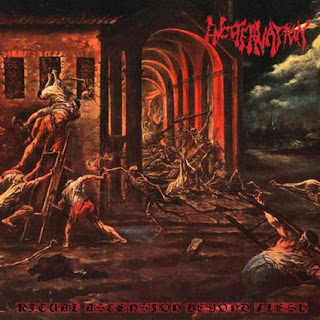 Already having circulated in the underground and having been released previously on both tape and vinyl, the Polish hell lords of grind and brutality at SMGR have bestowed upon us the cd version of this debut release of US death/doom metal Encoffination. Gutteral bowel rupturing deep growls come out from behind an eerie atmosphere of classic death/doom sounds that take that incredible genre to another sepulcheral dimension altogether. This is visceral and demented horror coming out at a slug shit pace that’s absolutely heavy and undeniably awesome.

This bands sound is somewhat of a mix of funereal doom like Evoken crossed with slow and burning death metal like Incantation, and current US based death/doom bands of Spun in Darkness and Mental Funeral, and classics like Winter and Autopsy. The purest brutality of death metal with the abysmal death and torture atmospheres of eternal suffering and postmortem vengeance is what lays in wait with “Ritual ascension Beyond Flesh”.