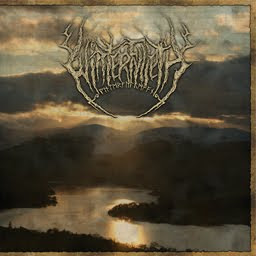 Based out of Manchester, England and deriving their name and inspirations from their homeland and history, one can only expect the majestic and epic atmospheres that these guys deliver. The band are described as playing: “English Black Metal, with traditional Northern European Folk and ambient overtones. “, and nothing could be closer to the truth.

In terms of sound it’s somewhere in the Wolves in the Throne Room, Blut Aus Nord (Memoria Vetusta II), Altar of Plagues, Twilight (Monument to Time End) realm with a bit of the more pagan Bathory albums. The tracks are very dense, the vocals are ferocious but more deliberate in execution than just merely being part of the atmosphere. The mood of the album fluctuates between conjuring up images of a furious firestorm and the blazing violent winds where everything is charred and destroyed, the pure horror and chaos, and then the sort of intense memory of it when looking at the damage after it had passed.

The mixture of the tempestuous parts and the more subdued bits cover the range of war, victory, and even despair in some of the more acoustic sounding passages as heard at the beginning of “The Honour of Good Men” before the ravaging kicks in. As with bands like Winterfylleth and the others mentioned, there’s always a devastating storm, some really deep and insightful morose atmospheres, and a sense of pride and strength within the album and sometime each track. The folk elements are not over bearing here in anyway and nothing is cliché or redundant so the result is a melodic and solid piece of modern black metal. Along with this release I’d definitely recommend checking out Woe and bay area band Embers, both they really capture the extremities of the various styles they mix and the final result is pretty thrilling and intense.

Winterfylleth:
http://www.myspace.com/winterfylleth
Posted by Born Without an Anus at 7:58 PM