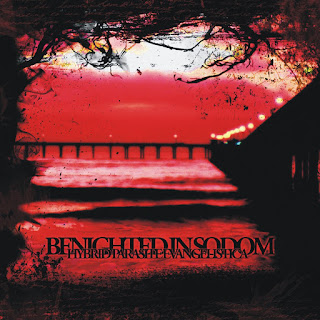 Benighted in Sodom is “Desperate atmospheric black metal”, and from first listen this album jumped to the head of the pile of new releases and I’ve been deeply focused on it for the last week or so that I’ve had it. It could be considered suicidal black metal in sound, but when listening to it in entirety it’s actually more of a narrative of being driven to suicide through pain inflicted and ending with the realization that your life was in fact worthless to those around you. This is some intense and driven creation that will captivate and disturb you as you can feel each word spoken and each painful gash made, it just aches with heaviness and burden. Some time has passed since something spoke to me as clearly as this release does and I cannot recommend it enough.

This album is dense and very emotive, you can actually understand their frustrations tribulations and they don’t try to mask them or muffle them either. The overall feel is supernatural and cerebral, but still very human. The opener, ”An Angel Circles the Drain” instantly slits your ephemeral artery with it’s jagged riff lash to open you and the album up. The way the layers of distorted and abstract guitar melodies swirl about as you listen, you can actually imagine the blood pouring out and flowing down a drain in much the same way. The vocals are furious expressive of pain, but this is not suicidal black metal….it’s vengeful and bitter instead.

“Liquid Flowing from a Slashed Wrist” starts out with a great almost horror film feel in the “unplugged” sounding strumming of the guitar over atmospheric effects. The vocals kick in with a frustrated yell and then speak in a demonic tone over classic buzzsaw guitar chords followed by a sudden pause to symphonic loomings and then the demon resumes his reciting. It’s almost like listening to the sound of some spirit torturing someone to the point of suicide as it chants out and bellows for one to kill themselves. This song reeks of torture and agony and definitely brings to mind some
sort of lunatics hallucination as he/she fights to avoid the inevitable self-demise to come.

“Nightshade and Arsenic” is a lighter guitar led instrumental piece that almost sounds like the final mortal resolution as the death has finally occurred and the soul is temporarily at rest.

“Solarium” comes in as a drifting wind with the synth and percussion, sort of like a soul moving on to its afterlife existence in some form or other. This track begins to feel more celestial and floating debris after a massive storm and then the theatrical spoken vocals burst out from beneath the debris almost as if they are the words of that soul condemning and cursing those from its former existence who caused the pain and suffering: “…Abuse yourselves and the ones you love…all I ever wanted to be was truly alive, and now before your eyes I will truly die!”

The final chapter of this saga is “The Surrogate”, comes out as a very bleak and melodic black metal soundtrack to a sort of psychological battle within oneself. The howling and raspy vocal line of “I was never there” repeated over a raw, churning and buzzing guitar riff makes one think of eternal pain and suffering, perhaps even irritation at the realization that no one cared that they were gone or were affected by their passing.

Again…this is some seriously intense listening, if it doesn’t make you feel something than you’re high or in denial. This was recently released this month and is monumental in my opinion, devastating, provocative and honest!!!!!

Benighted in Sodom contact/audio samples:
http://www.myspace.com/benightedinsodom
Posted by Born Without an Anus at 8:26 PM