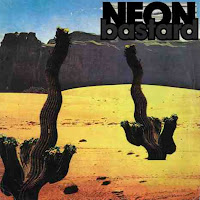 I think that it’s damn mother fucking obvious at this point that I really get my kicks from heavy crusty and sludge grime sounds and SURPRISE…Robotic Empire sends this release my way because they thought I’d be digging it based on my reviews and spot on they were in that assumption. With a name like Neon Bastard it doesn’t it doesn’t take too much else to convince me to investigate them any further.

Instantly the album opens up as a sludge-core fury whip, I was blown out of my chair and onto my ass from the blast of audio coming out from the speakers. Neon Bastard provide the perfect cross-blend poly-cotton audio fabric of: Black Cobra, Fistula, Melvins, Black Market Ministry, Eyehategod, with Discharge, Anti-Cimex, Butthole Surfers sound and feel. Sort of a punk/indie/sludge/doom/stoner/ “louder than an explosion in an airplane hanger sealed airtight with you as the only witness to the blast” type of atmosphere is what these New Zealanders create here. Amidst the riot there are also slow doom riff moments that crawl along at the pace of snails fucking, but are short-lived as the anger and “bull in a china closet” energy is the overwhelmingly dominant force here.

Either way you slice it “Meikhaus” will result in the un-scratchable itch to bang your head and run around in an intoxicated anarchic frenzy. This band is BOSS!!!!! These New Zealand miscreants also served time in some other acts: Dial, Strangers, and Captains Log. Hey man, even the cover art shows cacti that appear to be giving us all the finger!!!!!!! It makes my eyes swell up with tears of joy.
Posted by Born Without an Anus at 12:11 PM