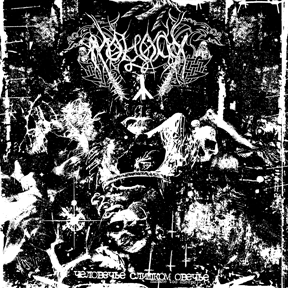 A decade or so in the making  (2003) and very unusual to say the least comes Humane Too Sheeps, a noise based experiment with analogue recordings that was once issued but never in vinyl until now. The first side consists of two tracks taken from the Universum EP, the other side is a lengthy hypnotic noise experiment that results from the blending of two tracks into what superficially feels as one. I’m a fan of dark ambient/ambient/analogue etc. etc. but this is akin to a stripped down version of Richard Ramirez (?) rather than a drone/ambient/dark ambient release so fans of ambient black metal Moloch and black metal Moloch can either take it or leave it, I am the going with the former rather than latter here.

By a stripped down Richard Ramirez I mean that the use of random dissonance and almost music-like sounds is very impressive. There’s actually song structure there that resonates as something that stems far beyond anything guitar based, in fact it’s very death industrial/PE.  I can hear metal clanking and other swoops and wooshes of bass tones, and given that this is actual guitar blows me away. I seriously can’t stop listening to it and being limited to 100 copies this one should go pretty fast.

Prison Tatt: http://prisontatt.com/
Posted by Born Without an Anus at 12:44 PM No comments: