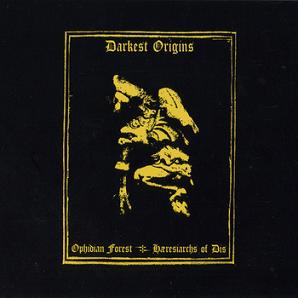 Well the split lives up to its title with both bands infusing new blood into some of their unreleased and classic songs remixed that definitely, given the nature of both bands, represent their mystical and occult roots. Ophidian Forest reminds me of a blend of early Satyricon and a VERY raw Summoning on a superficial level. They first deliver the symphonic “Densest Green” , an 8-minute raspy vocals and blistering echoing power chords amidst a phantom mist. You can’t really get more old school black metal than “Densest Green”, “Fear Bloody Wings” , and “Verschwiegenheit”…this stuff will freeze your soul in an instant, especially the vocals on “Fear Bloody Wings” , which almost literally feel as though they are some paranormal sermon evaporating as spoken. There’s just this intangible texture to Ophidian Forest that is spectral and cold, AND beyond physicality. Although Ophidian Forest only contribute three out of thirteen songs on here, they still consume roughly 30 minutes of life as they suck out your soul leaving the mind and body in a limbo of confusion. Very pagan and Very ethereal stuff!!!!

The majority of the nine HoD songs on this split, the first four of which are remixed from the earlier Dis demo, represent a more heavy crunching guitar rhythm tendency that reminds me of the raging pulses and tones of Horna’s Sotahuuto, early to Blood Fire Death era Bathory, Dethroned Christ, etc. That true Heavy Metal meets black metal sledgehammer riffing combination of tinny and distorted early heavy metal rhythms with speed and thrash afflictions creating a vortex that is as nasty and maniacal as say Blood Feast, and even bypassing buzzing swarms of just power chords cranked up on treble for flesh stripping leads and actual rhythm progressions that embody “Kill”.

“Black Prophecies” is a good example of that just said, as is “Choas Plague”, which really breaks up into an avalanche of addicting rhythms sort like Immortal’s “Cryptic Winterstorms” or “Call of the Wintermoon” with the lead guitar portions and vocals laid out in the front of the mix giving them an extra sonic kick and clarity that really gives it a vicious punch. Cernunnos (HoD) has not lost his touch for atmospherics though: “Manifestation” is a classic semi-raw melodic atmospheric storm that will invoke flashbacks of Denunciatus Cinis, but still builds on that template; “Wolfmoon” is a brief keyboard instrumental soaked in weird electronic analog effects like a clip to a classic made-for-tv horror film; “Blood and Souls” is a strange analog horror ambient that sounds like an EVP during a paranormal investigation with some weird organ in the background; and the grand infernal ending of “Circle of Sodomy” with that Emperor meets cleaner production sound and feel, including clean chanting vocals, that adhere the haunting elements together into a possession of the mind as much as the condemned soul. “Circle of Sodomy” is also re-recording of “3rd Movement: Circle” from his Overture debut, which I will have to pick up in the near future.

With this split Cernunnos intended to revisit and reinvest life into his early work and Demo period and ,in my honest opinion, was his best period judging from what I’ve heard of them now and in original form.  HoD should also have another full-length, Thirty-Eighth Sermon of the Unborn, out this fall as well so grab this one…and that one…and the Demo….AND Overture if you don’t have it either!!!! Ophidian Forest’s essentiality is self evident, i.e. MUST HAVE.

Posted by Born Without an Anus at 8:22 PM No comments: Links to this post