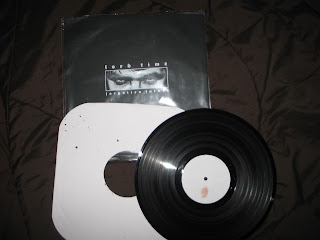 Forgotten Future was originally released in ’10 as a cassette on the Universal Consciousness label and is now seeing it’s well deserved vinyl installment in 2012 courtesy of Prison Tatt. In true PT form the MLP is a one sided black record with a silkscreened sleeve, but the artist also threw in a fingerprint of his own blood on the playable side and some drippings on the smooth side to up the ante a bit more.

Please don’t expect anything suicidal and depressive sounding based on the bloodletting, as Lord Time is nothing but purely homicidal and sociopathic and best described as black metal for serial killers. Each song is a morbid blast of sonic blackness, sometimes accompanied by a bludgeoning bass and percussion storm underneath and song structures that are loose but the sound itself is mechanical and inhuman. To me I hear maniacal rants of torture and ecstatic confessions of abhorrent deeds, gritty punkish razor blade guitar shrieks for chords, and no melody whatsoever-just utter necrotic insanity.

If you can stomach the abstract and often harsh sounds of Glass Coffin, Wold, Bloodulv, Smoke, Sutekh Hexen, and Black Funeral with the raw punkish black metal stomp of Dethroned Christ, early Darkthrone, early Immortal… then Lord Time is a solid choice to pick up. Limited to only 200 copies, you’d better get one quick.

Posted by Born Without an Anus at 9:37 PM No comments: 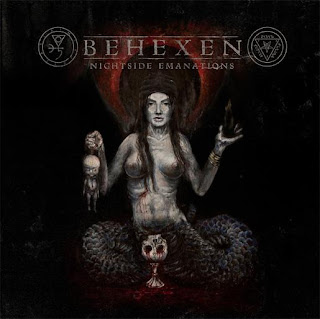 Too many of you reading this Behexen are no strangers to your conscious mind whether it be namesake and well deserved respect and notoriety, their ancient but ever progressing ugliness in sound and content, or both.  Regardless of where your coming from on Behexen familiarity make no mistake in thinking that this is anything less than a grotesque monstrosity of combined evil, cryptic, epic, intellectual pursuits with the clear production and incredible craft that takes a black metal (or any metal release for that matter) to that unimaginable depth that becomes like a possession of haunting of the mind and body where it’s more than a mere “listening” experience.

Behexen do not entertain they stimulate!!! Their use of the A-melodic (anti-melodic) guitar tones in conjunction with the clean trebly buzzing powerchord rhythms they sound legitimately inhuman and traditional black metal but rather than banging around creating chaos with them Behexen prefer to create solos and structures. You can certainly feel the rhythms honing in for the kill like buzzards of Hell hovering around you as you suffocate on your own feces as a result of being handed your self righteous pretentious ass literally on a platter on every song, but with “We Burn With Serpent Fire” the band steps things up a notch with the lead/solo work that creates an additional injection of horror and intensity that one cannot get from most raw and clamorous bands in the genre (of course I love those as well, but for different reasons).

“Luciferion Will” feels like the 100+ degree heat burning around me with this heat wave, there’s no wind at all and the heat just sucks the life out of me like being cremated alive. The combination of arpeggio leads and a strong echoing vocal chorus effect from behind the mix makes each song such as that mentioned and now “Awaken Tiamat” feel as if the album is climaxing as if the Devil is being called upon and arriving for the true awakening. The “behind-the-mix” vocal style has always been a favorite of mine, but with the clean production and the spacious feel of the arrangement of all of the sound elements the atmosphere is even more compelling. The fact that “Awaken Tiamat” is an actual anthem that’ll incinerate the uninitiated from its sinister heat doesn’t hurt either.

Whatever you’re in the mood for Behexen deliver it here: solid metal leads, well placed and memorable solos, varying rhythm structure, a clean and artistic production that creates something cinematic and degenerate, and a traditional black metal sound all the way through that’ll appeal to fans of the style across the board. Trust me, straight on forward down the shaft of shattered souls from the pulverizing “Wrathful Dragon Hau-Hra” all the way to “Kiss of the Dark Mother” you’ll be burning in Hell and burning others with you.

Let me put it to you another way: They typically can’t make a great supernatural/demonic horror film these days so I stick with classic like The Exorcist, The Cabinet of Dr. Caligari,Let Me In, and documentaries with re enactments of  the hauntings and the victims narrating them, and albums like Nightside Emanations to give me my thrill.

Posted by Born Without an Anus at 9:27 PM No comments: 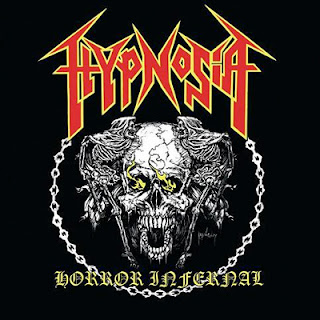 Horror Infernal is a compilation of the bands: “Crushed Existence” Demo ’96, “The Storms 1997” Demo, and “Violent Intensity” EP ’99; that inflicts a sledgehammer blow of  malevolent and atrocious thrash that  simply reeks of old school death metal with hints of Sodom (including a cover of the immortal anthem “Outbreak of Evil”).

“Crushed Existence” Demo 1996
From the word “go” this Demo begins to dig the knife in with the opening “Crushed Existence” that has a bit of early Mayhem infused with early Sodom that is a buzzing prison raped thrash rhythmic throng with a Swedish death metal tone. The sound of this band is that of a rogue chainsaw wielding psycopath, possessed by a demon, cranked up on crack, on an unstoppable rampage as anything in its path is shredded and/or pulverized as if run over by a tank. The raspy larynx abuse vocals growl and exude pure “NECRO” being inhuman as they are, especially on terrorizing anthems like “Undead”, “Paralyzed By Persecution”, “Threshold of Decay”, and the title track…in other words this entire Demo is a scene of mass murdering chaos. These Swedes also like to throw in some sharp razor blade leads and some short dicing solos to polish off the massacre and truly liquefy thy enemy. Again, there’s a definite Swedish Death Metal tone and intensity to this first 4 song bombardment so expect heavy and punishing unearthly blast and roid rage aggressive tempos as you are physically thrown into the next set of beatings with The Storms Demo opener “The Last Remains”.

“The Storms” Demo 1997
The slaughter continues with the annihilating neck breaker “The Last Remains”, on which the bass tones are subdued on this songs in favor of straight ahead chainsaw buzzing thrash insanity, but they make a come back on “Operation Clean-Sweep” so death thrash fiends will be back orgasmic spasms once again.

For me personally, Crushed Existence got me fired up with its filthy tunes drunk with bloodlust and bitter outrage but the next Demo didn’t feel as nasty and sort of lost me briefly, but it’s mainly due to a lessening of deep throbbing assaults and somehow feeling looser. Thankfully they put me in a chokehold once again with their final assault via the Violent Intensity Mini Album.

“Violent Intensity” Mini Album 1999
Instantly I’m set on fire with the sonic spark of “Haunting Death”, a cleaner thrashy version of “Undead” that still burns like chlorine gas in ones eyes taking a stench of Sodom and twisting it further into depravity. “Perpetual Dormancy” is another stomping thrash tantrum with outstanding nods to death metal including the infamous pig squeal!!!!! The rhythm on “Perpetual Dormancy” sounds like someone being violently and repeatedly stabbed, in other words it’s a soundtrack to a fit of homicidal rage. The murderous sadism and nitrous powered tempos continue to unleash the sounds invoking the apex of human committed atrocities with “Mental Terror” and the shrieking leads of “The Storms”.

The album is available in the U.S. through Shadow Kingdom (and “no” I don’t work for them, although I spend my paychecks on that damn site), Hells Headbangers, and probably many other label store/distros. I love this label (I Hate) and have been lucky and honored to be able to work with them closely for a few years. Please check them out if you haven’t already and look into some of their catalog, they release nothing but solid metal releases that they stand by 100%, not what sells at the current moment.
Posted by Born Without an Anus at 6:14 PM No comments: