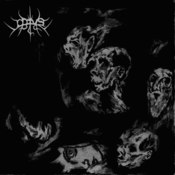 Here’s another recent find that literally hypnotized me through its throbbing ambient black metal suicidal/depressive psychosis. There’s definite similarities to Xasthur, Velvet Cacoon, Altar of Plagues, etc. , but upon further listening with any of these crimson washed drugged out sounding shrieks of anguish, there’s always a unique atmosphere and direction in each one so if you’re rolling your eyes and thinking “Oh God not this again, I want Fire and Brimstone” then pass on this, but if you’re into the untranquil disturbingly introspective black psychedelia and it’s suffocatingly heavy distortion of both sound and reality then Obolus is a must.

“Desolation” is an intense and evocative opening song that sets the mood for despair and solitude that begins as a fiery attack that wavers into a more melodic and ethereal atmosphere without letting up on the pulsing rhythms. Defintiely some druggy depressive haze with this one.

“Hatred” veers away from the dreamlike/altered states vibe and goes straight for the jugular with almost motorized buzzing riff assaults and percussive battery full of aggression but still very ghostly. Nothing droning or melodic here, just some serious bloodletting and frustration told to angular disharmonies and repetitive percussive clanking.

“Grievance” comes back in strong and violent like a spasm of lunacy and bitterness with melody, but the mood is hostile and, although still very filmy and smoky in atmosphere, this one really balances out “Hatred” and ties back in with “Desolation” completing a series of events/thoughts come full circle form “fucked” to ‘Fucking someone/something else” instead.

There are four songs total that altogether when inhaled resemble a heavy humid vapor in the air that challenges your lungs a bit, sort of like a partial dry drowning as you swallow a specter. There’s a lot to ingest here in just four songs, the second one “Reflection” is a 2-minute instrumental that on its own doesn’t do too much except connect the first and third song.

Posted by Born Without an Anus at 11:52 PM No comments: 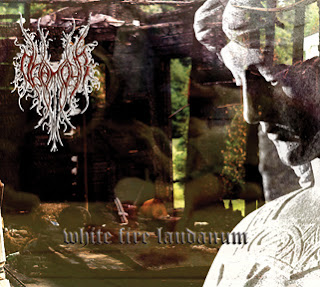 “White Fire Laudanum” is another drug induced haze of muddled emotional shrieking behind a collage of lush distortion sort of like being string out on opiates (which they were actually) and recreating your altered state through thick walls of melodic guitar chords. There’s a definite nod depressive and melodic psychedelia such as Methadrone and Nadja.

“The Hermit Rain” sounds like the title actually, it actually works well for following “Dans le Souffrance” as on here you almost feel the release like the spirit has finally been freed through a peaceful deaths slumber. The vocals continually scrawl and disperse from behind the mix as smoke into the damp air.

Dhampyr is one of the best that I’ve heard so far in this often slandered style, this stuff seriously is like an outer body experience brought to you by two guys who were literally out of their minds while doing this and the result is a dense and colorful suicidal poem scribbled by a guitar, a bass, a synth, and drums and hallucinatory states. Turn on and let the psychosis steal your soul.

Most of their work is mysterious and actually given away on their site below, this is the first ever physical release of dhampyr work and is still available so check it out on the Prison Tatt site alongside some of their other incredible releases.

Posted by Born Without an Anus at 10:59 PM No comments: 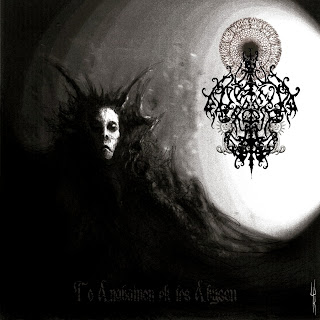 Originally set for release back in 2008 but ended up buried beneath the rubble of the disintegrated label, the resurrection of this true entity of ruin and disharmony by Daemon worship Productions couldn’t be more fitting.  The album opens up with the chaotic delirium of “Cup of Babylon”, and what a way to start out this psychotic and surreal journey through the foul and dissonant fuzz storm that is Bestia Arcana. Initially it explodes with angular guitar assaults and what sounds like actual explosions as the gates of purgatory burst forth unleashing a whirlwind of insanity that shall not be uttered as it is cursed such as the names in the book of the dead. The vocals are deep vicious growls behind the mix of barbed wire jagged lesions of lead shredding and the bombastic “booms” in the background heralding absolution through mortal destruction, then about halfway into the song the shift changes to a sprawling holocaust of dark psychedelic atmospheric black metal not unlike the scorching and suffocating atmospheres heard on the second Twilight album a few years back, before bursting back into the diesel powered barrage of buzzing riffs and horrendous inhuman growls. And that’s literally “just the beginning”, Bestia Arcana are like the Roman legions storming through Judea leaving nothing but rivers of blood and blazing infernos.

“Feverwind” brings back treble buzzing, but the density and violence has been lifted like a veil over the mutilated corpse that was humanity and their habitats revealing the horrors that befell during “Cup of Babylon”. The percussion is ritualistic and smooth throughout this bastardized cinematic cascade that literally unravels horrors that the Holy can’t even bear to fathom. I can almost see a figure drenched in blood uttering the weird schizophrenic vocals of the “Feverwind”  in gruesome indecipherable phrases as it walks out from the fire and the shrieks of the people burning alive bring a smile upon it’s face.

“Shepherd of Perdition” is a return to the disharmonic “melodies” and lunatic ranting growls of the start of the grand massacre, now combined with symphonic elements and some chaotic outbursts as the bringer of death praises and rejoices in various further acts of defiling the remains.

Albums like this are further evidence that evil is born and not just bred, but also a reminder that black metal has not lost it’s ability to convey pure horror so approach this one with caution, it just might incinerate you on contact. Others may claim to be the real deal, but this one is the true form of Hells horrors as imagined by the so-called righteous that keep them pissing themselves in fear and wavering hypocrisy, if this is Hell then it certainly lives up to it’s reputation.

Posted by Born Without an Anus at 11:51 PM No comments: 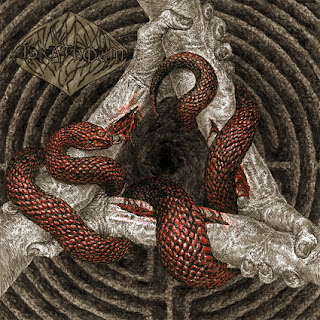 Here’s yet another ripping band that’s been in the trenches since the early 90’s and is only now really reaching their full potential without any compromise or pretense. Instantly when I sampled this ones sound I knew in a fraction of a second that it WAS for me, there’s just something in this sound that combines the epic, occult, and memorable without any leaning toward melody or cinematic assistance, and catches you by throat with their continual rhythm changes within each song while never losing a beat. The chords are traditional buzzing black metal distortion swarms, but the distortion is controlled to a distinct level so that you can actually feel the rhythms, which switch between classic metal rhythms and full blown blackened chaos. Israthoum are really skilled in being unique and intense, maintaining depth through themselves and pulling from all their influences without giving those influences away through obvious imitation.

The overall vibe of Black Poison and Shared Wounds is that of grooving heavy fronted traditional black metal  buzzing razor blade power chord rage of chaos and spiraling leads with sparse melodies that sound like a distorted metallic violent storm at sea. The percussion is a barrage of crashing and well-placed bass drum hits (for guys) as deliberate and potent as a steel toe roundhouse to the testes. One of the main standouts in my mind though, are the vocals going back and forth between shrieking or howling black metal and cleaner shouting/calling from behind the fog of night in a storm reminding me a lot of Drautran Throne of the Depths.

Aside from the main logistics covered, “Devil Bacchus” breaks up the album with it’s brutal crunching freight train “chugga chugga” thrash assaults, making “Devil Bacchus” a serious fucking bulldozer of an anthem that really takes you by surprise but still sounds as if it’s “in place” on the album with the others, some of which may subtly invoke some atmospheric and brief pagan rhythms, such as in “The Unraveling Traveler”,  and “Burning the Sephiroth”.

The production is really solid, nothing lo-fi, but there’s no lessening of the ominous buzzing chaos as a result. I’m a lover of the raw and gruesome shrieking banshee shit just as much as the more polished stuff, so as long as it still kicks ass, it’s a worthy release, and Black Poison… definitely is destructive and menacing!!!!

also available from Hells Headbangers webstore currently and probably very soon in others such as a Deathgasm, Nuclear War Now,etc.

Posted by Born Without an Anus at 8:30 PM No comments: 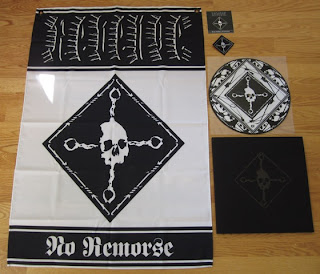 I’m almost certain that to many of you this band is no stranger, this is some of the best and most wicked of the cult black/death metal bands born like a deranged phoenix out of the flames and ashes of the bastard cult band Conqueror (much of whose catalog is made available yet again through NWN Productions). The vocals are like crust/grind vocals which abuse thyne ears through rapid scrawling gibberish ridden with filth and veracity,  and honestly there’s a truckers breakfast burrito assload of crust influence in their sound bringing noxious acts like Doom and Deviated Instinct to the forefront of my mind with some bastardized demo era Napalm Death even.

Black, Death, and or whatever –the-fuck  one needs to classify Revenge as, there’s nothing like Revenge and although we’re all welcome to make asses of ourselves trying to pigeonhole this band, they’ll always have the last demonic laugh on our tab.
This S.O.B. shreds!!!!!! It’s unintelligible blasphemic and hate powered lyrical annihilation aimed at destroying our brain cells quicker than huffing household solvents. As with Doom and Deviated Instinct, I couldn’t care less about sophistication when the sounds garrote you like fresh catch with an industrial powered DC carving knife like this does. Revenge bare some similarity to the crass and vehement vomit of Ride For Revenge crossed with some Profanatica and maybe even some Autopsy for sheer ugly doom laden brutality, but again…FUCK the comparisons and get this shit before it gets you!!!!!

Posted by Born Without an Anus at 8:22 PM No comments: