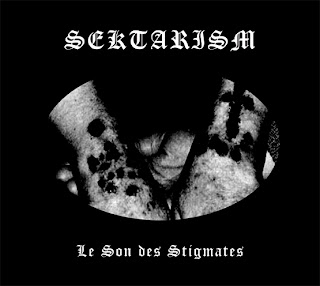 5 years of self sacrifice and struggle has yielded this expansive sonic 3 song EP that is something that combines the bombastic and raw , drawn out, psychedelic  black doom of Burning Witch and The Body, with the unique and growing death rock black metal like Hateful Abandon and Wreck and Reference. There’s only three songs, but two of them or about 20-minutes in length and there’s no droning of lapses of groove in either to nod you off to snooze town, the drum rhythms create these simple but hypnotic and catchy vibes that’ll keep your mind throbbing as the pure weight of the heaviness will gradually crush your ribs into dust from the pressure.

“Hosanna Sathana” is 21-minutes of trudging ugly groove that reminds me a bit of the reptilian improvised rattle and thumping garage vibe of Ride For Revenge. The riffs really swim through a viscous mucous of distortion and ring out in slow motion as the drums rattle and clank out the rhythms behind the sonic plume of guitar fuzz. There’s that low and slow pull on the groove that pulls them rhythms almost to a complete halt then releases them again at full force only to be dragged back again creating a continual cycle of drizzly doom that will challenge even the strongest of speakers. Something about the sheer heaviness and the mix of shrieking feedback with the teasing cycle of rhythms and the continual motion of it all that works like hypnotism. It’s almost like Sonic Youth doing an experimental black metal fused with doom band with these epic screeching feedback manipulations over shrieking and croaking occult lyrics and a spiraling LSD inspired cult ritual expanding over 21-minutes. To me this is easily on of the more intoxicating and heavy bass overloaded sounds that I’ve heard in a Hell of a while!!!!!

“Le Testament” is a bit more active than it’s predecessor, but mostly in the vocal area. The swirling distortion and constant pumping basslines with some simple yet effective drumming keeps the entrancing ability still an 11 on a scale from 1 to 10, as you can actually feel the vortex suck you in. You’re essentially being dry drowned by seismic down tuned heavy psychedelic doom free-for-alls with a primal occult, or murderous drug addled cult influence…it’s definitely evil and murky and quite possibly is feeding on my brain right now with the radiating distortion that has my attention glued to it.

Posted by Born Without an Anus at 11:32 PM No comments: