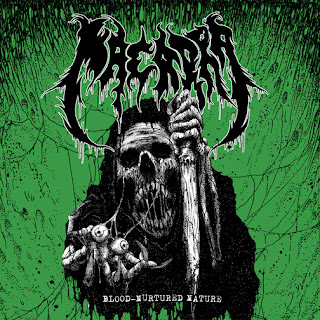 I can never go for more than a few days without my old school death metal getting some play and making me extremely critical and obnoxiously stubborn to review recent stuff due to loyalty and subconscious comparisons with the originators. Recently Baphomet, Nocturnus, Cancer, and as always, Dismember (Like an Everflowing Stream) have been giving my ears an exhaustive workout and Macabra fit into that niche perfectly. Tracks like “Hominal Peel Diggers” carry a lethal dosage of simple and crunchy deeper toned “squeal” guitar leads and an even balance of old school death growls between Swedish and U.S. styles, at times rumbling in the guttural realm of Swedish riffage, but always weaving in and out of many classic death metal styles and never giving way to imitation or any specific style over another.

Blood-Nurtured Nature is just what we all need, it’s:  Morbid Angel, Entombed, Obituary, Immolation, Suffocation, Death, Sinister,Wombbath, Dismember and so on; all at once with no compromising. No two tracks are the same, each of the eight on here have great dynamics in vocals that range from straight ahead deep throat grating to more of a shriek but the lyrics are still distinguishable. “Consuming the Fleshly Wax” busts out some great abysmal melodic instrumental that gives a bit sense of Death without too much technicality, rather just the right amount to go alongside the distinctive bassline to create an empty and desolate abyss. The piano intro to “Thick Slabs of Moribund Fat” layered over an angular guitar melody instantly ropes you in and begins to dissolve your soul, but before you get deeper into what appears to be an Edge of Sanity epic and melodic death metal tune, it goes to trudging and grunting primal barbarism. There’s even some thrashy rhythm guitar chugging that wraps around your neck like a noose made of your own entrails, having been ripped out earlier in the album.

It shouldn’t be any surprise that this band is another project of Mark Riddick (Fetid Zombie),as it does fit his artwork and old school death metal roots.  It also turns out that the vocals were recorded in an old funerarium, which gives it a legitimate aura of death that can’t be bullshitted through effects. All in all, this is not only an incredible debut album that literally reeks of old school death brutality and rawness, but it could even pass as a long lost album dug up from some unconsecrated obscurity of early 90’s demo ground.

If you don't have this...you're death metal collection will never be complete!!!!


Posted by Born Without an Anus at 6:41 PM No comments: 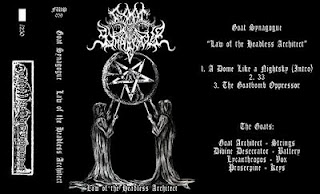 Starts out with “ A Dome Like a Nightsky”, a trippy symphonic intro with mournful spoken word vocals over a simple keyboard, probably single note or two note melody, but enough to set the tone for a  Transylvanian crypt atmosphere.

“33” is a Greek Black Metal attack of bombastic percussion and searing guitar riffing creating a swarm of evil as the vocals go between straight forward solo and chorus style. Some of the riffs are very Sodom/Kreator like blistering flashes that easily sever spines in a single blow, so expect a lot of high energy buzzing aggression, but with the simple Emperor ITNSE symphonic keyboard background there’s a really interesting combination in the mixing of it all that works REALLY fucking well!!!!!

“The Goatbomb Opressor” tends to rely more heavily on the Emperor ITNSE symphonic keyboard for its atmosphere, but the rawness of the recording and the shredding rhythm guitar that busts out chord changes and riffs like an onslaught of saw blades flying loose from an industrial saw gone berserk, it’s impossible not to recognize the brutality and ferocity present here.

This is a 3 song Demo (2011) from this Greek band, that repeats on both sides and is a glimpse into the glorious future and past of true black metal. It’s so simple and familiar, yet it’s still engaging and somewhat new…thankfully bands like this still exist. Forgotten Wisdom Productions share a roster with Hells Headbangers ( Superchrist, Denouncement Pyre for example) and have been around since 1999 so they don’t release crap. Check them out as well, they have audio under each release, and hear some great metal.

Both NWN and HHR are out of copies, but check the labels link above for their other distros and you’ll possibly track down a copy.

Posted by Born Without an Anus at 6:34 PM No comments: 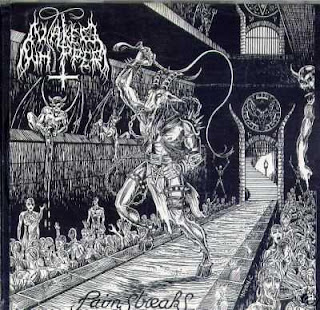 Incredible classic crusty grind with a bit of a death metal streak from Germany, a very RAW and poor production that in some ways adds as opposed to subtracting from the power of the album. Naked Whipper is essential!!!! If you like stuff like Black Witchery, Perversor, Necroholocaust, Conqueror, Impaled Nazarene you’ll love this shit!!!! It’s VERY early styled Death metal, before death metal was “death metal” and just a bunch of miscreants banging around creating aggressive and addicting noise.

The sound fades in and out on some of the songs and there’s some crackling too, but the fucking punishment they induce with those riffs is just deadly. The vocals are pretty good too, nice and raspy, ridden with filth and a bit of a nice death growl that with the crusty/thrashy death metal tone of the band reminds me of stuff like really early Master. There’s also a subtle old school Swedish Death metal influence on a few tracks here and there, especially with that throttling bass tone that they have going on. Here with “Anal Queen”. Now I’m hearing a bit of a Bathtub Shitter/Unholy Grave tone in the vocals and rhythms, that’s very crusty/punk metal on “Painstreaks”.

The others should show up with these links above so you can actually hear the entire album in advance. Naked Whipper is wild and raw and just what we need some days to get us into full-blown headbanger mode.

The album itself consists of 11 slaughtering anthems of ugliness on the first side and then the album tracks done live on the other side. I know this is also rare and original, from the early ‘90’s so don’t hesitate to grab a vinyl or tape version of this before it’s gone again. Pain Streaks is a classic lost gem of vile and cult metal!!!!

Links:
http://www.myspace.com/nakedwhipper
http://shop-hellsheadbangers.com/search.asp (on vinyl even)
http://degenerateslimedistro.blogspot.com/  (cassette for $4 or so)
Posted by Born Without an Anus at 6:30 PM No comments: