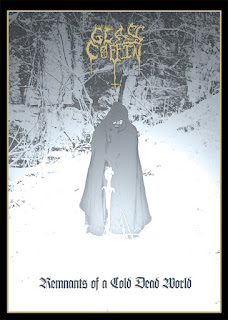 AHHHWWWW Shit!!!! Just when I think that I’m finally free and clear of black metal releases there always has to be one or two that are not just amazing, they are “Fuckin’ Amazing”. Well, Glass Coffin is one of those and mainly because I’m familiar with GC from their other releases, I was able to overcome my usual “abort” and “reject” tendencies and thankfully so because this is the “good shit” right here folks.

While the brief  56 second intro had me thinking  frosty and atmospheric raw black metal, “We Bleed the Blood of Hate” immediately showed me otherwise with an abrupt U-turn into raw and crusty punkish Hell with more of a doom/crust tone in some of the guitar riffs plus there is a tendency to throw the listener off guard with some catchy pseudo-leads that give a bit of dirty rock n’ roll flare. Now that I’m alert, addicted and willing to be consumed a bit at a time by this album the groovy Pentagram meets VERY raw and punkish primitive metal (?) with “Unholy Ritual”. Seriously, now I’m utterly baffled and in a state of blissful awe. There’s so much stuff labeled as this and that, right now “Black and Roll” is a popular one and usually very much off the mark, but Glass Coffin does, definitely to my aging and specially tuned ears, embody the gritty and groovy rock n’ roll swagger with elements of early black metal and some essence of crust that would fit that term better than most but I have too much respect for the artist and too much creativity to limit anything worthwhile of labels.

“The Abyss Calls”, “I am Satan’s Sword” reminds me of the crazy ass unrefined killer black metal that Rusty Axe used to put out, but again… just when something seems familiar and ready to stick like peanut buttery shits to someones ass, this SOB evolves again and continually will like a Goddamn virus, everytime you figure it out it mutates on you and you have to start all over. In “I am Satan’s Sword there’s even some busting out of Motorhead influence!!!! Also expect some Beherit/Black Crucifixion flavor with “Ghosts in the Night Sky”, the croaky vocals and primal doomy guitar riffs with minimal clanking percussion could really sell the song as a lost “Nordic” black metal demo, I can even spot some very early Darkthrone and Gorgoroth in the vocals…it’s really awesome to hear something like this that is so simple and crude, and yet without being a mere replica it actually is convincingly from that classic era that I can’t seem to move out of in terms of black metal.

In 10 songs and roughly a half an hours worth of time this album will easily prove itself to be a perfect substitute for so many sounds/moods simply because it IS all of those many bundled up into a goopy crusted wad of grungy metallic mucous. I have yet, now embarrassingly admitted, to have heard the Josh Lay (aka Glass Coffin) power electronic/experimental work, but given the level of talent present in GC it’s fair to say that I’ll be acquainted with it very soon.

On another note, this is a CD/art-zine set complete with black and white illustrations from Mr. Lay himself and they really DO fit the sounds of the album.

Fans of stuff like: Black Funeral, Ride For Revenge, Wold, Bloodulv, Wormsblood, and definitely the sounds of Finland’s Incriminated and Bloodhammer; will really dig this stuff, but so might anyone into a large chunk of the Hells Headbangers catalog. Okay, fans of old school and long lost ugliness from the late 80’s to early 90’s black metal will probably love this just as much so don’t write it off until you’ve heard it for yourself just because it’s not a Moribund release.

Posted by Born Without an Anus at 5:11 PM No comments: