Omision - In the Shadow of the Cross (Chaos Records 2011) 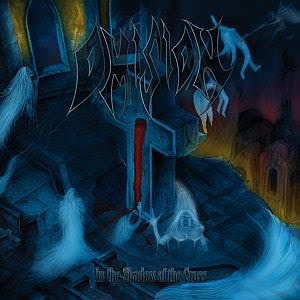 Although just in the last decade these guys have been gradually rising from the decrepit soil covering the grueling pit of old school death metal this Tijuana based act has been active and slaughtering since ’93 and I’d be seriously delusional if I didn’t hear and feel 1993 and earlier in these battleaxe anthems. This album is best summed up as a collection of whiplash pit anthems of unrelenting speed and monstrosity spiraling out of control as the leads shred flesh and the rhythms pound and crush out all light and life leaving nothing but a freezing black void.

Each track comes at you mean and full of violent intentions, like a hurricane of thrash paced riffs, gruff but decipherable vokills reeking of death and decay, nuclear devastating rhythms that’ll convert lead into dust as they have the strength to penetrate that deep and heavy, and the downtuned riffage can be felt miles beneath the Earth’s crust…possibly into the core!!!! You can see the death toll rise as each track unfolds one after another, seething with blasphemy and swathed in crimson sweat.

For fans of: Malevolent Creation, Incantation, Massacre, Sepultura, Deicide, Morbid Angel, and everything classic death metal that is as brutally intense as it is rhythmic and yet still melodic.
Posted by Born Without an Anus at 7:24 PM No comments: Links to this post